Shout out to those two actual fucking Hegelians I used to know. Not socialists, not Marxists too i to Hegel, straight up fucking Hegelians. They accepted the critiques of capitalism, BUT then instead of abolition, their idea was 'super capitalism'. To make everybody bourgeoisie, and thus through that abolish class. It's like the worst idea ever, and I loved how insane it was.

They were smart guys for sure, smarter than me any day, and so people used to worship the ground the walked on. These supposed communists were kissing the asses of two guys saying that capitalism could be made the great equaliser via some revolution.

WHO THE FUCK IS A HEGELIAN IN THIS DAY AND AGE?!?! Not even I could be that damn obscuritant

@CornishRepublicanArmy i went on a date with a maoist third worldist hegelian radfem. it did not end well

@wintgenstein
@CornishRepublicanArmy
So much if this is over my head, I'm just so offended that she would have the nerve to call you a bad writer, fuck I barely know what we're talking about, I'm just worked up about that one thing.

She sounds like a fuckin real piece of work...

Reeve who walks among the rows   @demonsthenes13@nutt.church 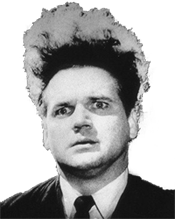